The History of All Saints’ Church, Farley

At some unknown date before 1680, a mediaeval chapel, standing on a parcel of glebe land about 300 yards to the west of the present building, had fallen into disrepair and Farley parishioners had to walk to the church at Pitton each Sunday.

At the time when plans for Farley Church were being made, Stephen Fox and Sir Christopher Wren were working together in London on a scheme to build Chelsea Hospital for pensioners. The project largely emanated from Stephen Fox, who contributed over £13,000 of his own money – about one third of the total cost. This close collaboration, and the fact that Fox and Wren were both Wiltshire men, led to a good working relationship. What would have been more probable than that Fox would have asked Wren to assist him with the church at Farley? Wren’s master mason, Alexander Fort, oversaw the building of the church, as he had the almshouses, but the church’s architectural style suggests much more Wren influence in its design.

The building costs of the church came to £2013.8s.5d. It is built of brick, laid to English Bond, with Chilmark stone dressings, below plain clay tile roofs. It comprises a nave, a chancel and west tower with north and south chapels symmetrical about the centre line of the nave. The plan is of a Greek cross, somewhat unusual for that time, although a design for St Paul’s Cathedral was on that plan. Indeed, during Victorian times Farley All Saints was known as “Little St Paul’s in the country”. There are none of the decorative touches that are to be found on the Wren churches in London, but the extreme simplicity is fitting for the rural setting of the building. The tower at the west end had one bell originally. A second being added in the 19th century, and there is a very attractive sun dial on the south face. The main entrance is through the south transept.

Over this entrance is a flat porch, under a circular window with a stained glass patter around the border. The windows of the nave, chancel and transepts are all of the same size, being typical of that period – round arched with continuous moulding and a decorative keystone at the top of the arch. The east window is again round arched, but divided into three sections with the central panel echoing the outside curve.

Left:  Detail of the east window. 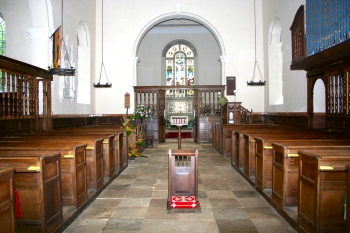 On entering the church through the south entrance and walking past the oak panelling of the vestry the immediate effect is of light airiness. Plain walls, high roof and large windows give an uncluttered effect throughout. The iron ‘wheels’ and chains hanging from the ceiling to hold the candles, and the octagonal font with cover, are original. The pulpit is believed to have been saved from the old chapel when it was pulled down. The date of the screens is uncertain, although apparently contemporary, the Wren Society do not believe them to be original.

The north transept is known as the Ilchester Chapel, and contains three memorials to the Founder and members of his family. Below the chapel is the crypt which was the main burial place of the Fox and Ilchester family until the 19th century. The major monument on the north wall of the nave is by R Westmacott junior and is to the second Lord Ilchester.

Four hatchments to the Fox-Strangeways family decorate the walls. The founder also provided two elaborately carved chairs, which may well have been used by him and his wife at the Benediction Service. He also gave the very fine church plate which bears the Fox arms. The date mark is for 1687-8 and the maker is said to be Ralph Leete, who also made some of the plate for St James’ Piccadilly.

The church was extensively repaired in 1790-91, and then re-ordered by Ewan Christian in 1874. The pews, originally high and with doors, were cut down and made into uniform height. Surplus wood was used to make choir stalls. The pulpit was reduced in height and the windows filled with stained glass. Since then, however, the same windows have been re-glazed with the plain glass of the original design, leaving only the windows of the chancel and the west end in Victorian stained glass. Another addition of this time was a reredos of inlaid marble and mosaic, designed by W F Dixon and executed by Salviati. It is formed of Caen stone and Devonshire marble, and depicts the four gospels: Luke (a winged bull), Mark (a lion), Matthew (an angel) and John (an eagle). A tiled dado was also installed in 1874 and other wall decorations were applied but have since been covered.

The present organ is by Gray and Davidson, and was acquired from the redundant church of St Peter’s Chichester in 1982. In 2000 it was rebuilt by Dr Richard Godfrey on mechanical action with additions to both manual and pedal divisions to make it a suitable instrument for both accompaniment of worship and recitals.